The eSpares team will very shortly be braving a 170ft abseil down the side of a 16-storey hotel. Why we hear you ask? Not because we’re thrill seekers, not because we’re fearless, but because we want to face our fears to support an amazing cause: John Taylor Hospice.

Our connection with the hospice and the incredible work they do is personal. Here’s the story of how they helped Caroline (our Management Accountant) and her mum at a very difficult time. 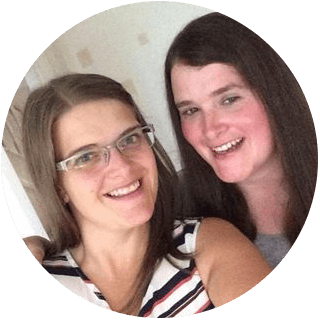 Caroline (left) with her sister
My first experience of the John Taylor Hospice was back in 2006. My mum had been diagnosed with cancer in July 2005 and when the diagnosis was known to be terminal we were offered various support networks.

I’ve lived in Erdington all my life and the hospice was always just a building at the end of my road where people went to die. My mum was a very sceptical person and she thought that accepting any help would destroy her independence. She was invited to attend a day centre at the hospice every Tuesday and for the fact that she wasn’t working then and was getting very bored at home (she had even started home baking) she thought she’d give it a go.

She went every week, unless she was in hospital or having treatment and we started taking part in fundraising activities. Whilst at the day centre my mum’s eyes were opened to alternative therapies including Reiki and hypnotherapy. These were things I never thought my mum would do, but she had nothing to lose. She even became a case study for a university student and was hypnotised once every fortnight at our house.

Some weeks she’d come home with craft items, which we all found highly hilarious, but they were activities that distracted her from her current circumstances. We still have some of the craft items Mum made and if anything they’re little keepsakes.

More importantly, the thing I would thank the hospice for most, was the offer of respite care. Twice my mum and dad were given the opportunity to visit the Macmillan Hotel in Bournemouth where they even celebrated their 25th wedding anniversary and met many new friends. The hospice also offered respite care at the site on Grange Road, but my mum, being the stubborn woman she was turned around and said, “If I need respite I’ll book my husband in!”

In January 2008 my mum was admitted to the hospice to spend her final days there. This was an extremely tough time for all the family, but the staff were amazing. They even came to Mum’s bedside to perform Reiki on her as they had done at the day centre. She passed away on 2nd February 2008 and at her funeral we raised over £1,000 for the hospice.

Like anyone after losing a family member, we were all very upset and possibly even struggling with loss, even though we had known for two years how the illness would end. But the support from the hospice continued; we had leaflets and counselling sessions made available to us.

A hospice is not just a place you go to die! It’s a whole network of support, respite, counselling and care and a place where, perhaps just for one day a week, people come together to share their experiences and try to forget about their illness.

Every single day John Taylor Hospice helps over 600 people like Caroline’s mum because they believe that every moment in every person’s life matters. We’re very proud to support such a fantastic cause. You can keep tabs on our abseil fundraising progress via our fundraising page and we’ll update you right here on the blog as to how we get on on the day!