Here at eSpares, we live and breathe to spread the good word of fixing things with our own two hands. That’s why, after looking at our recent research relating to the number of people taking household repairs into their own hands, we couldn’t be happier with the results.

And it’s not just us that are happy about this. Our research has received a great deal of coverage in the media, with publications also shining some light on the positives of this shift in the ‘Fix it Yourself’ attitude. People are fixing things themselves today more than ever, and we hope this increase is only the beginning of a more repair-friendly world.

A Rise in Repairs

First and foremost, let’s take a look at the results of our research. In a survey of 2000 UK adults of all ages, we found that there has been an enormous rise in people (younger generations in particular) fixing their household appliances themselves.

Here is just some of what we uncovered:

The Youth are the Future

The age range of 18-24 showed especially promising figures. When the participants of our survey were asked if they had had to fix or repair an appliance in their own home in the last 12 months, 58% of 18-to-24-year-olds said ‘yes’. This shows that younger generations are adopting a hands-on approach with their own repairs now more than ever!

Those who partook in our survey also showed just how much money can be saved when you take the time to repair your own appliances. More than half of all participants claimed to have saved financially by carrying out their own repairs, with almost as many (46.88%) reporting that fixing their own appliances to save money was a direct motivator. Of these, nearly 10% saved between £151 to £200 and over twice as many (20.63%) saved between £51 to £100.

The Faster, the Better

The main reason for people wanting to fix their own appliances over the last year was that it was the faster option – our youngest participants especially. Over 43% of those aged 18-24 said it was quicker for them to fix their appliances themselves, rather than wait for an engineer. This clearly shows that taking care of your own repairs won’t just save you money, but valuable time as well.

Fixing to be Eco-Friendly

Our survey showed that one of the most common reasons for participants to carry out their own repairs was because it is more environmentally friendly, with over 29% stating this as the most popular motivator. This was especially true for young people, with an impressive 40% of the 18-24 age group citing this as a reason. It looks like the Fix It Yourself approach helps to save the planet as much as it does your wallet!

The age of the internet has its pros and cons, but we can all agree that instant access to information is extremely helpful. Repairs are no exception – our survey showed that YouTube is the most common source of information when it comes to people seeking advice on fixing their own appliances, with a whopping 43.87% listing it as their go-to choice for assistance. That’s why we’re glad to be able to offer household appliance repair guidance and information on our own eSpares YouTube channel, doing our part in encouraging the Fix It Yourself mindset!

We asked what appliances people have fixed for themselves in the last 12 months, from a list of 15 appliances including washing machines, dishwashers, fridges, freezers, lawnmowers and more. Of these, the age range of 18-24 was most notably active, ranging from 27% for tumble dryers to a whopping 42% for microwaves.

The Fix-It Attitude is Country-Wide

Certain areas across the UK saw a greater rise in the Fix it Yourself movement than others, regardless of age altogether. For example, in London, the amount of adults of all ages who have carried out a repair at home by themselves in the last 12 months is an absolutely staggering 69%. Other regions with an increase in self-repairs include Scotland (59%), the North East (56%) and Wales (53%).

We aren’t the only ones impressed by these results. A wide range of publications, newspapers and news websites reported on our survey, highlighting these promising figures and the shift towards a more repair friendly world. The articles not only reported on our research but also included a quote from the man himself, our CEO, Andrew Sharp.

Here’s what Andrew had to say:

“The FIY (Fix it Yourself) trend has seen a major boom over the past year through lockdowns and shows no signs of abating. From installing new filters in the cooker hood to replacing an oven door seal, people have realised just how easy repairs can be – and the satisfaction that comes with being able to fix things yourself.”

Here are the publications that have reported on our survey and the positive numbers it revealed: 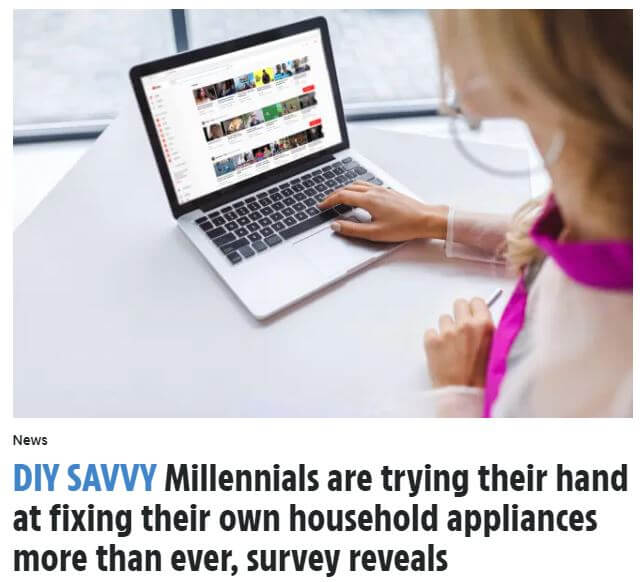 Our findings featured in an article in The Sun, The Scottish Sun, The Irish Sun and The US Sun with a feature in the print version too, which has a circulation of 1,210,915! We couldn’t be happier that the Fix It Yourself message is being spread to such a large audience. 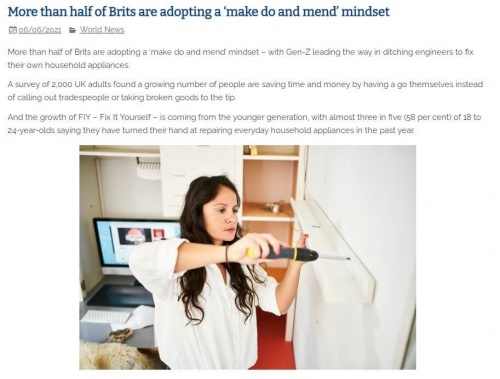 Celebrity Tidings covered our survey too, touching on both the environmental benefits of repairing appliances as well as the promising rise in young people getting stuck in for themselves. 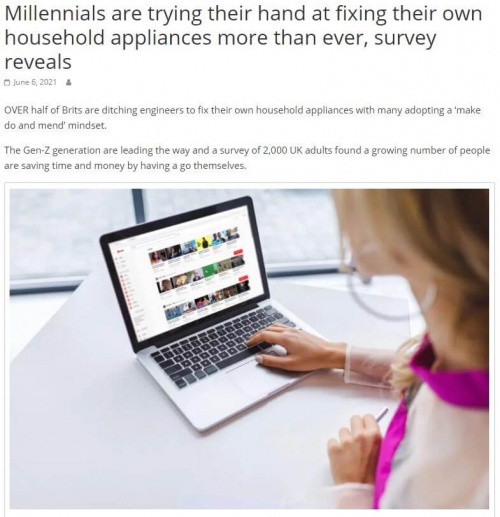 Another publication that shared the exciting results of our survey was Future Tech Trends. Again, they did a wonderful job at covering the highlights of our research, including the environmental benefits and even mentioning our YouTube channel. 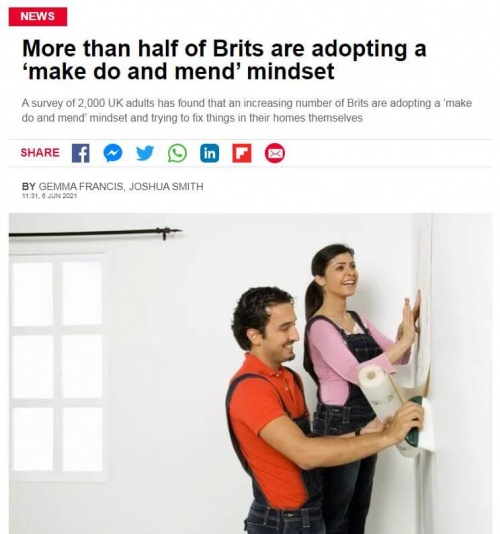 The Daily Star is another popular news publication we were happy to see these results shared by. The more the merrier – especially when it comes to encouraging home repairs and outlining the benefits! 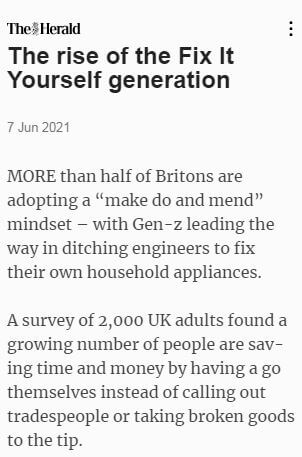 We also saw our survey receive attention in newspapers as well as online, with The Herald sharing our results, as well as the promise younger generations are showing when it comes to fixing things for ourselves!

Other publications that helped to spread the word of our research include Electrical Daily News, as well as the Daily Mirror and Metro newspapers who have a circulation of 388,716 and 1,426,535 respectively. That’s a massive audience, and we’re absolutely thrilled at the level of attention being brought to this rise of home repairs!

Of course, the results of our survey are worth celebrating on their own, but all of this coverage is the icing on the cake. With the good word of home repairs spreading all across the country thanks to this media attention, this spike in the Fix It Yourself movement will hopefully continue to snowball as more and more people read about the benefits of getting handy in their own homes.

The benefits of this range from personal to economic to environmental, and with a little luck, this is only the beginning of a greater change. While many people seem to have been getting stuck in with repairs throughout lockdown this past year, we’re hopeful that this trend will keep rising now that life is getting back to normal.

To read more about the benefits of repairing, have a read of our blog post on how a repair economy creates a kinder, more caring community.