Since the launch of our #FixFirst campaign, our dedicated customers, fellow fixers and expert environmentalists have come together to help spread the word sharing their stories, knowledge and skills.

After catching word of our travelling campaign, various media platforms across the UK also wanted to join in the fight and get the whole nation involved! We have since appeared in many online newspapers, magazines and forums, print publications and radio shows!

After our study found that a whopping 75% of UK residents don’t attempt to fix appliances themselves, resulting in millions of tonnes of e-waste being sent to landfill every year, we knew we had to do something about it.

Our answer? Encourage people to think fix first! If we repaired just 10% more appliances than we throw away, we would save a massive 100,000 tonnes of e-waste in just one year. Scrapped appliances are terrible for the environment, not to mention a huge waste of your money, so we challenged our community to spread the word and help save our planet from further harm.

We still have a long way to go, but with the help of supporters like these, together we can make a truly positive change.

Our community came together…

The word was spread… 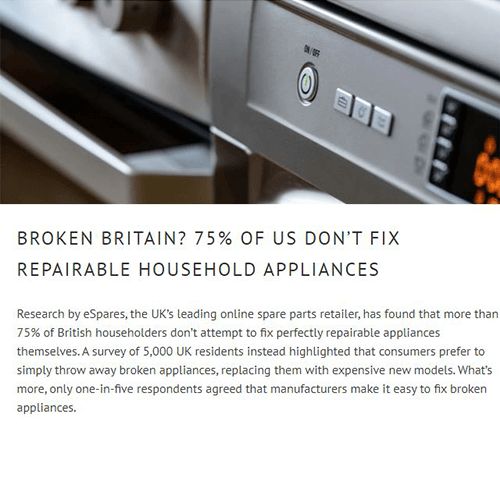 PressMum shared our stats and provided readers with some food for thought as far as repairing broken appliances was concerned. 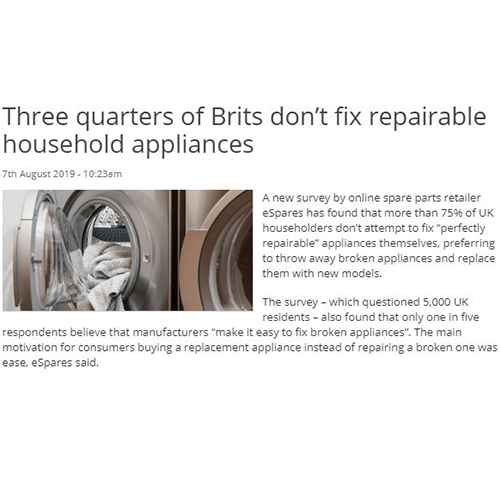 kbbdaily.com also wanted its readers to understand the importance of fixing appliances and why they should do this themselves.

There was some city rivalry… 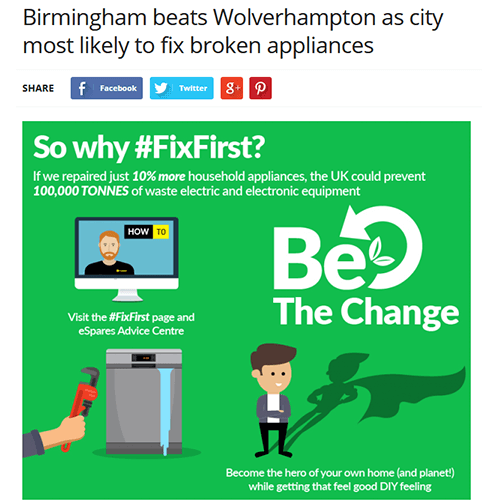 The Pheonix online newspaper started a fixing war between the cities of Birmingham and Wolverhampton! It told readers that Brummies are far better at fixing their appliances as Wolverhampton was found to be the joint-worst city in the UK at disposing of broken appliances and buying new, alongside Newcastle.

Publications urged readers to ‘fix up’ 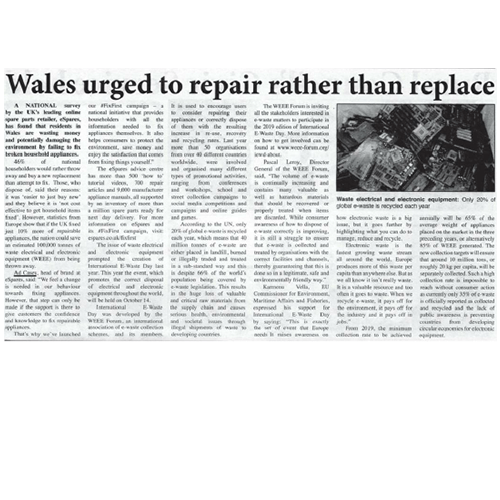 The Carmarthenshire Herald called on its readers to think before scrapping appliances and help prevent the amount of e-waste being sent to landfill. 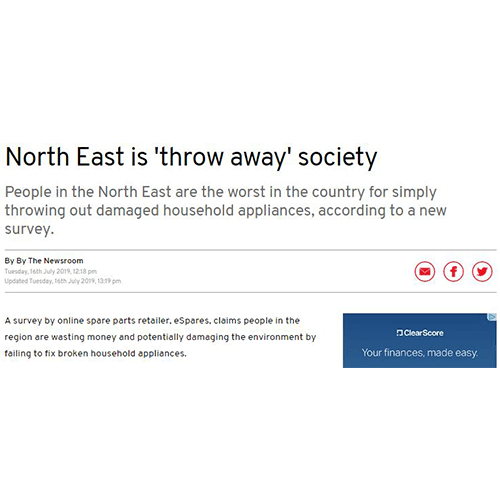 The Sunderland Echo wanted to make its readers aware that their area came out as one of the worst in the UK for not fixing appliances themselves!

Some celebrated their fix-it savvy region 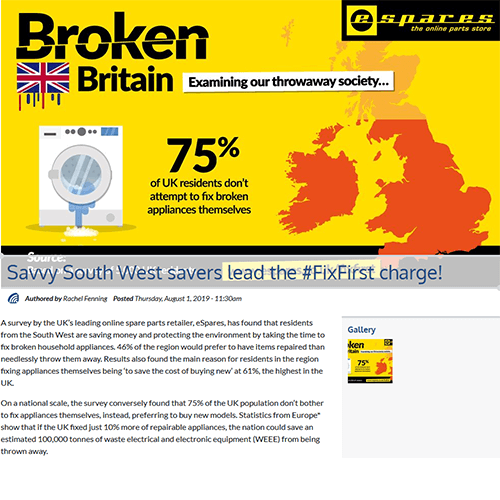 Exeter Daily celebrated its community of fixers in the South West as nearly half of its residents would rather fix than replace with 61% of them doing so to save on the cost of buying new. 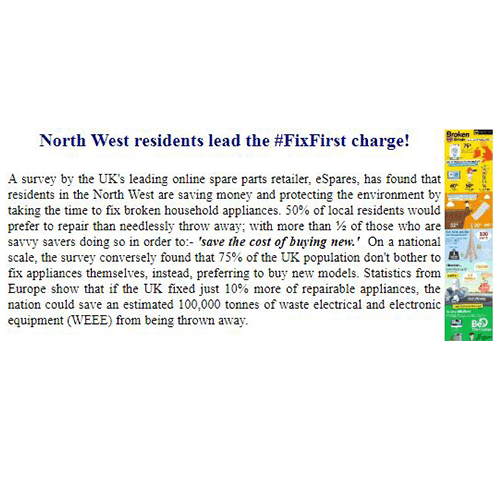 The Southport Reporter also wanted to celebrate its fix-it savvy region as 50% of its local residents stating they prefer to repair than needlessly throw away! Hooray for the west of the region!

We appeared live on air! 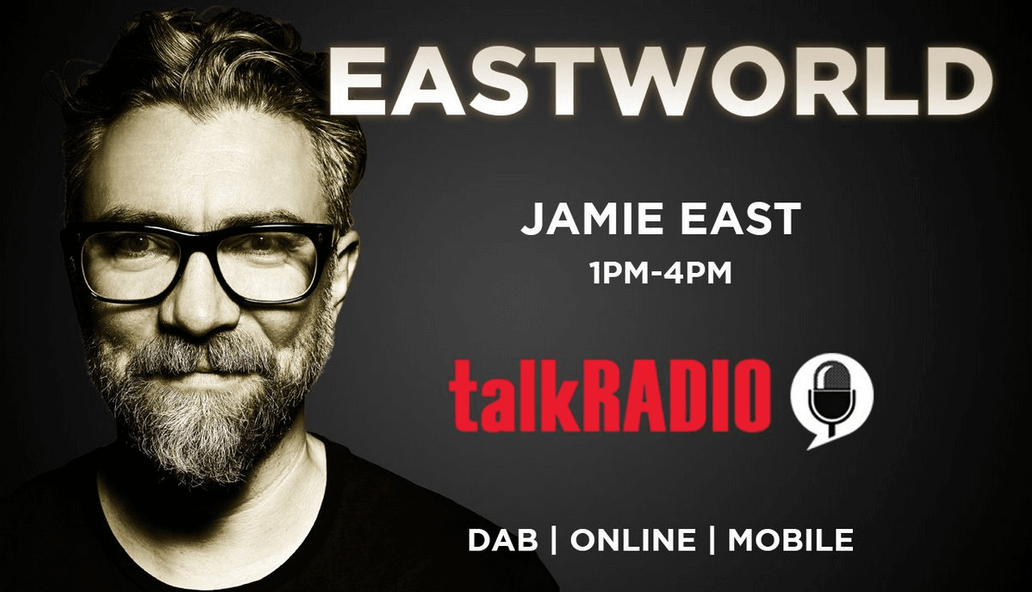 We featured on TalkRadio to give listeners the full story of our #FixFirst campaign. When talking to presenter, Jamie East, we discussed the importance of fixing, how easy it can actually be and gave listeners some handy hints and tips.

Over at eSpares we make it easy to complete your appliance fix! With over 500 how-to videos, a social community of savvy fixers and engineers on hand to help you out, there really is no reason not to give it a try. Save your appliance and a heap of cash by thinking #FixFirst as well as helping to save our world!