Let me tell you a story. The story of how one girl, who in the past would never have considered going near the pipes under the sink, was able to successfully install a washing machine. That girl is me. I’m Eleanor, nice to meet you. 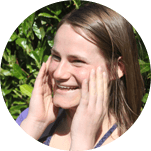 Now as I work for the appliance gurus at eSpares it would be a dishonour, nay a crime, not to install my washing machine myself. In the past, I have parted with my money to pay a washing machine company to plumb in my machine for me. But those days are over!

If you can assemble Ikea furniture successfully, you can definitely plumb in a washing machine. I speak from experience; I’ve put together a lot of BILLY bookcases in my lifetime.

There are really only five main steps involved (for UK machines).

In the past words like “transit bolts” and “drain hose” may as well have been in a different language, but working with our engineers has taught me well. Now (with my firsthand experience fresh in my mind) I can teach you.

It really is easy, I promise.

For installing my Whirlpool washing machine all I needed was one spanner. It was a 10mm spanner, the fourth smallest one from this set I own.

Some steps also involved tilting the machine, for which I enlisted the help of my boyfriend. But for the most part, the installation was a one-woman job.

These are the specific steps involved in plumbing in my Whirlpool washer. Your washing machine may be a little different, but the overall process is pretty standard for UK models. 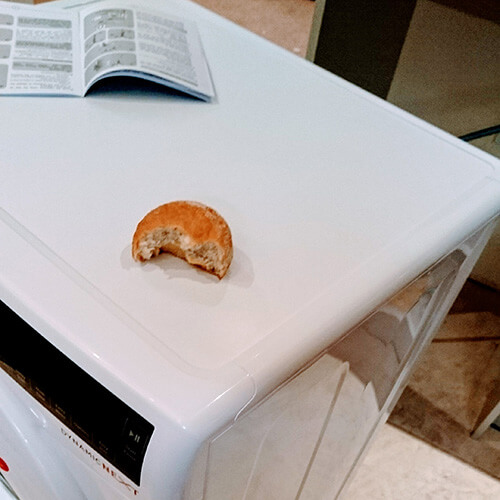 Have a flick through the manual

The installation manual that came with my machine was really useful. The instructions were easy to follow for someone who had never installed a washing machine before.

I’d highly recommend having a pre-installation read to get to know your specific washing machine better. 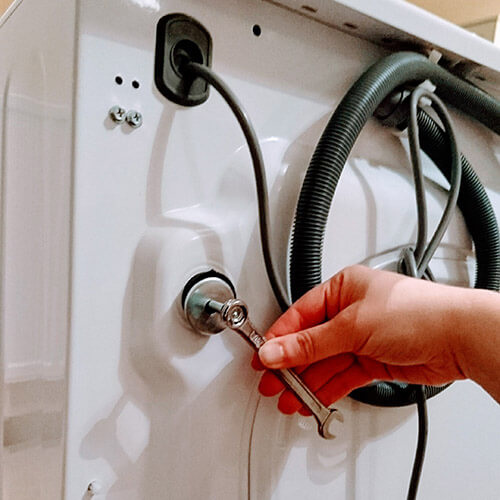 Transit bolts stop your washing machine from being damaged when it’s transported. Leave them in the machine and it’ll start bouncing around violently during the wash, possibly damaging itself or your kitchen worktops.

Enter your spanner! Unscrew the bolts, remove them and keep them safe. The man who delivered my machine let me know that some manufacturers require the bolts to be kept for the warranty to be valid. 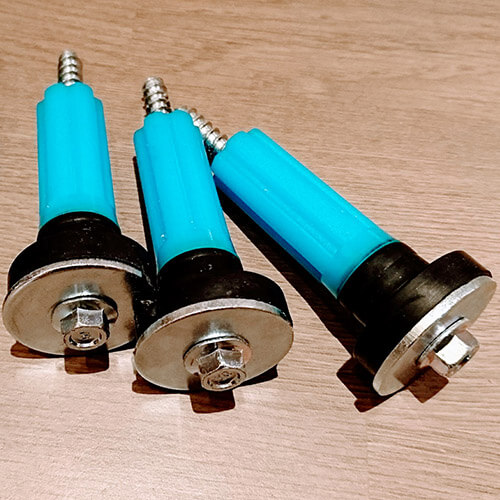 Remove the bolt casings from inside the machine

When I removed the transit bolts, the blue plastic casings covering them fell down inside the machine. I wasn’t worried as I’d read the manual which informed me this was normal.

Three of the bolts were easy to find and remove, but I did have to trust my boyfriend with my life for the fourth. He tilted the machine and I put my head underneath it so I could peer around with a torch to locate the fourth bolt.

I found it and wasn’t decapitated. Double result. 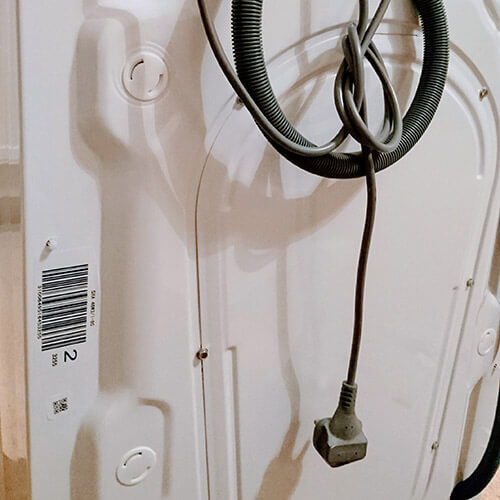 Supplied with my machine were little plastic covers to be placed over the holes left by the transit bolts, to stop dust and dirt getting into the machine. 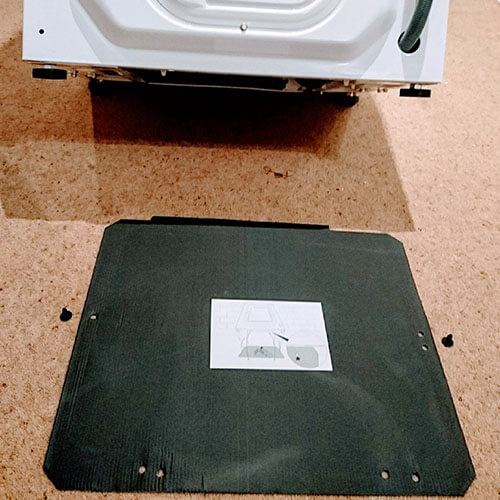 Install the base of the washing machine

There was a corrugated plastic base to be fitted once the transit bolt casings had been removed. This was easy to fit. It just needed aligning and securing with some small plastic bolts that came with the machine. 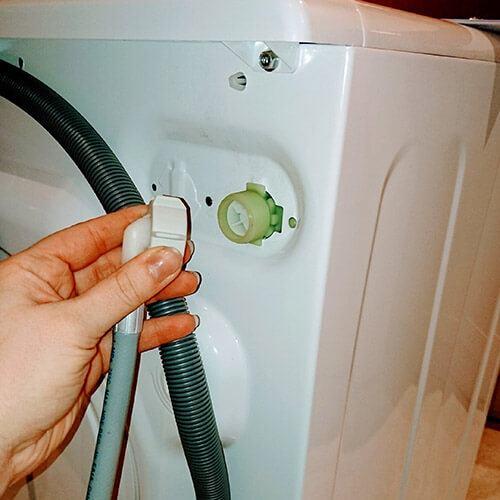 Attach the fill hose to the washing machine

The fill hose lets water flow into the washing machine. I screwed it onto the machine firmly with my hand, not a tool, to avoid over tightening. 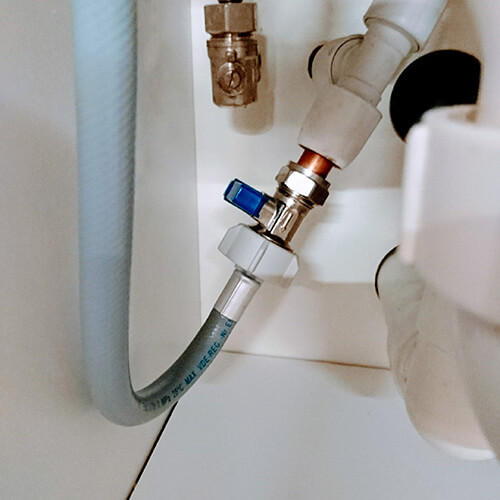 Attach the fill hose under the sink

The other end of the fill hose connects to a tap under the sink that supplies clean water. This tap has a switch to turn the water supply on and off. I screwed the fill hose to the tap (which was a little fiddly to line up at first, but I got there). 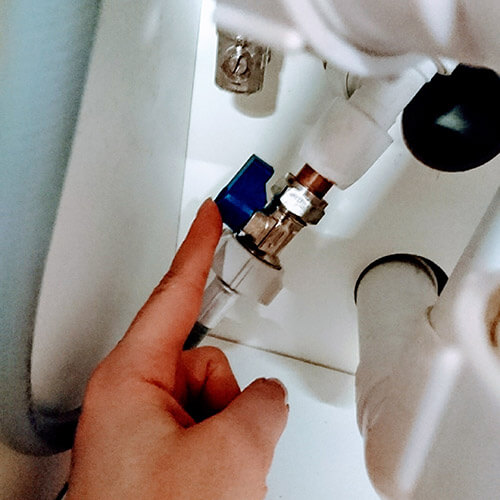 Turn on the water

Then I just needed to twist the blue switch on the tap to turn on the water supply to the washing machine. There was a brief sound of running water as the hose was filled.

Luckily there were no leaks or drips which showed me I’d screwed each end on tightly enough! 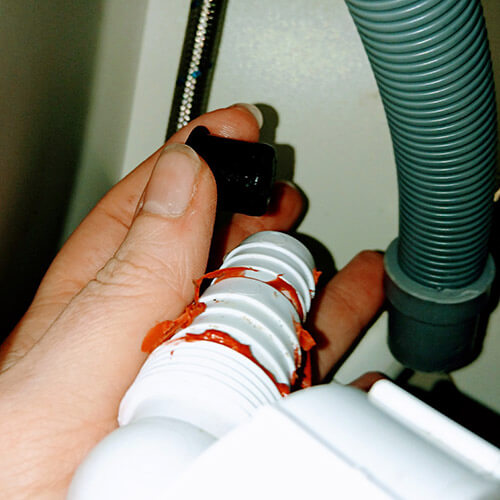 As I had just moved house and didn’t have a washing machine already installed, the drain pipe under the sink had a cap in it to stop it from leaking when I used the sink above it. I removed this so that my machine could drain freely.

I then pushed the drain hose (which was already connected to the back of the washing machine) onto the drain pipe firmly using my hands not tools as before. 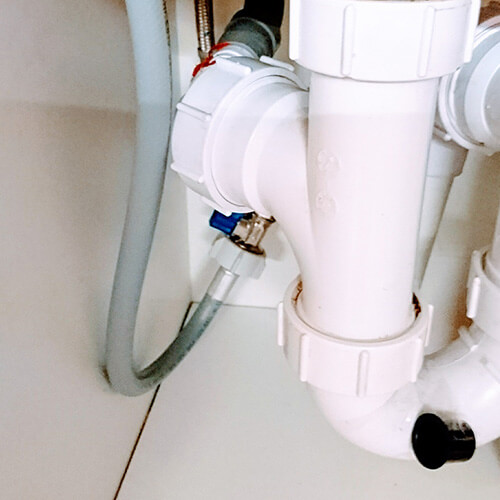 I’ve Sellotaped my cap to the drain pipe under the sink so I can find it and replace it when I move house. 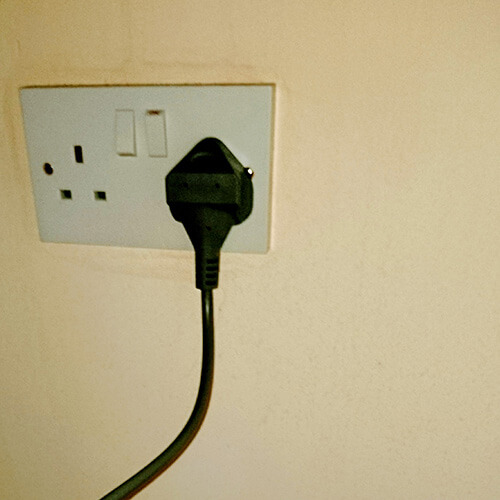 Level the machine, plug in and switch on

My tiles were even enough that my washing machine didn’t wobble, but I gave it a good shake to make sure. If your floor is uneven, you can screw or unscrew the feet at the base of your washer as necessary to level it. A wobbly machine can damage itself as it shakes and spins. Then plug in and you’re good to go! 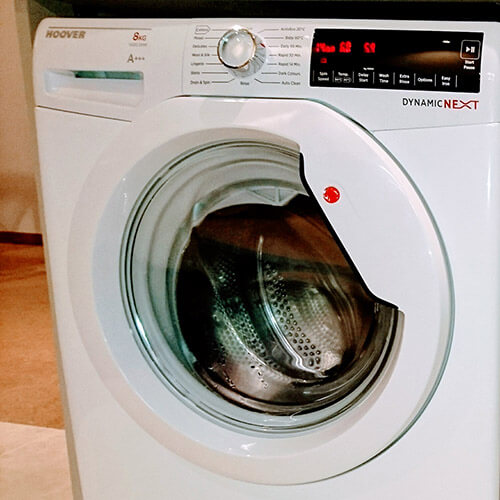 Celebrate with a test wash!

Run a hot wash cycle to flush out any dirt in the machine and to check it’s running with no issues.

Everything good? Pat yourself on the back and enjoy feeling like a domestic hero. Also, boast about your newfound skills. I certainly did.

Whilst you’ve got your manual to hand, it’s a good idea to read the rest of it! There’ll be plenty of handy tips about getting the best washing results and guides for common problems inside.

The Alternative to Plumbing In Your Machine Yourself

When we bought our new washing machine my definitely-not-DIY-savvy boyfriend suggested we just let the delivery men install it for us. The idea!

Luckily I am a strong independent woman who don’t need no man to help with washing machine plumbing. (Except with the tilting.)

However, if you’re interested in the connection service (which I was only to see how much money I’d saved myself) both Curry’s and AO offer washing machine installation for £25.

Hopefully, I’ve convinced you that that £25 belongs in your purse/wallet instead.

Oh, one last thing. As well as reading the manual that came with the washing machine, I also recommend watching this video. Especially if you’re the type who finds it easier to watch other people do something than read instructions.

Any questions? Hit me up in the comments.