Christmas is the absolute worst time for an appliance to go wrong. All of the repairs engineers are out enjoying turkey dinners and seasonal drinks. The shops are heaving with people trying to get a bargain in the sales. But you still need a working appliance ASAP! 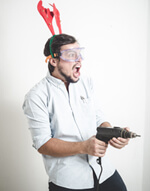 On the positive side (and we like to think positive) the period between Christmas and the New Year sets up the perfect situation for a DIY fix. You most likely have plenty of time off work to get your teeth stuck into a repair and with our how-to videos, advice, and parts you’re well equipped to get the job done yourself.

Here are some DIY success stories straight from our customers’ mouths (via their keyboards).

Alan had an unfortunate incident with a water pipe but luckily was able to fix it himself!

After moving to a new house we decided to start putting up pictures etc.  It’s a dot & dab construction as you would expect and it was super-easy to trace the pipes etc. Then I heard hissing water, I’d nailed the central heating feed. Micro-bore under pressure goes a long way! I was able to fix that myself. I got chuckled at when I popped into the merchants for the stuff and I had to dig out the wall before tidying it up and re-plastering. The missus thought that was all dead funny, ‘specially as it was just before Christmas… ho ho no!

Lesley saved Christmas with some quick thinking when her oven broke!

My best fix it was a week before Christmas when my oven broke. The fan was working but there was no heat. I contacted eSpares, who directed me to a video on YouTube. I ordered my new element and installed it myself step-by -step as the video showed. Fantastic!!! And cooked the turkey without hassle for Christmas.

Gemma realised that having the right tools for the job is an essential part of the DIY process!

I had bought my son a train play table when he was younger and had left it until 10pm Christmas Eve to start building it, thinking it was a small job. It took me 4 hours with my poorly equipped tool box! My son loved it, so it was all worth it in the end!

Dad to the Rescue

Jennifer gets her dad on the case when things go wrong!

My Dad once mended my vacuum cleaner with a part from an ancient machine he’d inherited nearly twenty years previously. He also mended the dishwasher in our rented house. It worked fine, but I didn’t fully appreciate having to step round him and the dismembered machine for the whole of Christmas morning as I cooked my first ever public Christmas dinner!

This mystery reviewer from Cardiff who didn’t leave their name almost had a New Year’s nightmare… but luckily with some quick thinking, they got their slow cooker back in working order (with a little help from one of our slow cooker spares).

The slow cooker bowl was purchased as a replacement for a damaged one. I don’t know how it became damaged but as I was preparing for a large New Year family gathering it was an absolute necessity. Delivery excellent, item perfect. Family didn’t appreciate how lucky they were that everything went as originally planned.

Last but most certainly not least, following the rigours of the Christmas period, JL made a successful replacement of a fridge salad crisper box.

Could not have been easier. Website helped me to identify the model number (didn’t know where the model number would otherwise be lurking!) and made the selection criteria far easier to navigate. Item arrived within 7 days despite the fact the order was made on New Year’s Eve.

Now take a leaf out of the book of these Christmas saviours, go forth and replace your broken appliances with confidence!