It is often said that “charity begins at home”. However, yesterday (October 19th) charity definitely began in the centre of Birmingham as over 20,000 runners, many running for various charities, lined up to take part in the Bupa Great Birmingham Run. Amongst the runners was a member of the eSpares team, Mike, who was running for our chosen charity, John Taylor Hospice.

The Bupa Great Birmingham Run is a half marathon (13.1 miles) and takes in some of Birmingham’s most iconic sights, including the Cadbury factory in Bournville and Edgbaston Cricket Ground. The final few miles also see runners take on “The Hill” (at mile 11) before coming onto a packed Broad Street, where spectators line both sides cheering everyone on and pushing them to the finish line. 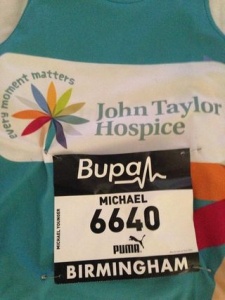 This year’s race was started by England cricketer Ian Bell and 2014 Commonwealth Games Gold Medallist, Jodie Stimpson, who also participated in the race herself.

As the elite athletes, including the eventual winner of the men’s race, Joel Kimutai, were sent on their way, the rest of the runners, including Mike, were being put through their paces in a warm-up on the starting stretch.

Warm-up completed, it was time for the runners to begin their races, in various waves (depending on their expected times) – and at roughly 10:40am Mike crossed the start line to begin the grueling 13.1 miles. 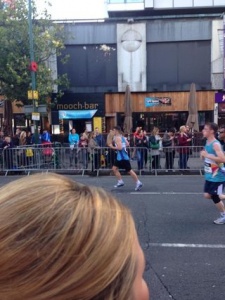 Throughout each mile, from the first to the last, the streets were lined with spectators cheering on the runners.

Some spectators were holding signs of encouragement, such as two fantastic signs which read: “Great Job Total Stranger, Keep It Up” and “Pain is Temporary, Online Finish Times are Permanent”.

Other spectators handed out sweets giving runners that extra boost they needed. Local businesses also got involved, with one shop keeper in Balsall Heath giving out bananas to runners as they passed.

Mile after mile passed the cheering from members of the public continued and after beating “The Hill”, Mike appeared at the top of Broad Street with the finish line in sight. Markers counted the runners down 800 metres to go, then 400 metres, before a sign informing runners they only had 200 metres to go….and there it was the long-awaited finish line and the end of a hard race.

Timing chip handed into officials, water and goodie bag (which included finishers t-shirt and medal) collected, Mike made his way back to the John Taylor Hospice tent, where a free massage was waiting.

Following the race, Mike said: “It’s the fourth half marathon I’ve completed, and the second time I’ve ran the Birmingham one, yet today felt special. The crowds throughout the course were incredible, especially along the final stretch along Broad Street.

“I’d deliberately asked those who’d come to cheer me on to be around the 200-metre mark at the end, and as I heard them shout I managed to find that extra ounce of strength for a final sprint to the finish.

“It was an incredible day, and I’m very proud to have been able to raise money and run for John Taylor Hospice.” 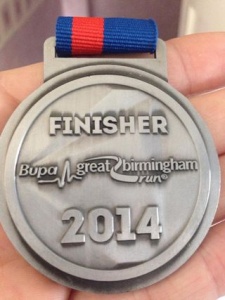 And how did Mike do? He only managed to clock a personal best, crossing the line in 1 hour 52 minutes and 55 seconds.